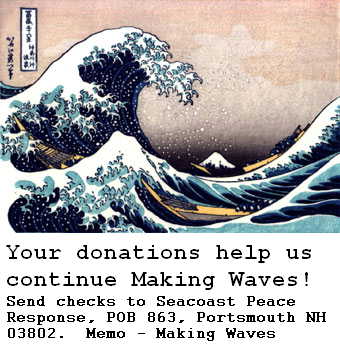 Having trouble?
TECH HELP is available for listeners, for producers, and for DJ's.

We want to hear from you!
To ask questions, make comments, offer help or donations, or just say hello, e-mail us at: 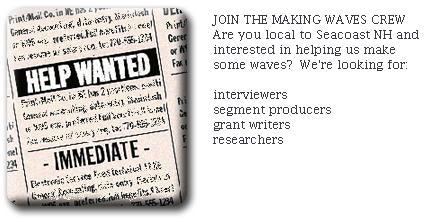 NOTE THE LINKS BELOW WON'T WORK.
Pick the show you want, then find the MP3 file you want to hear for that show number available HERE ONLY. Right-click on the Mp3 you want, select 'save link as', save it to the desktop, then double-click that file when it's downloaded. The links below are obsolete, just for kept for historical purposes.

The Feb 4th show was nearly canceled due to a transmitter failure.

MW69 (Mar 4) - Environment; Economics
Part A: News, NH environmental legislation, a talk on global competitiveness and programs of social uplift, and music.
Part B: Women and the US budget, 'Creating the Poor' commentary, Labor News, and BTL.

MW75 (Apr 15) - Death and Taxes
Part A: News, Priorities NH on our tax money, coverage of a War Tax Resistance Action in Portsmouth NH, music.
Part B: Geov Parrish on 'why pay taxes?', Labor News, and Michael Parenti on wealth and equality, and BTL.

MW79 (May 13) - Working for Change
Part A: News, an interview with "Band Together," an interview with candidate Carol Shea-Porter, music.
Part B: Parenti on What Progressives Want, Geov Parrish on Medicare, people's history on Mother's Day, and BTL.

MW80 (May 20) - Palestine; Children's Voices
Part A: News, local children on what peace is, Anne Miller on her trip to Palestine / Israel, and Palestinian and Israeli children speak.
Part B: A report on the current struggle in Bil'in, Geov Parrish - "NOW We Care?", BTL, and music.

MW82 (June 3) - Ending the War on Iraq
Part A - news; May 31st NH anti-war actions coverage; Mind Over Matters Interview of of Anthony Arnove author of "Iraq: The Logic of Withdrawal."
Part B - Music; Geov Parrish - Undermining the War Effort; Media Minutes; Between the Lines.

MW108 (Dec 2) - Struggle in Iraq & Oaxaca, Mexico
Pt A - News; Tom Hayden on how to get the US out of Iraq; Mumia Abu-Jamal: Echoes of Vietnam; James Carroll comment; music.
Pt B - MW Interview: Sean Donahue on Qaxaca Mexico and Latin American true democracy movements; Between the Lines.

MW110 (Dec 16) - Freedom, War & Democracy
Pt A - News You Need to Know; News Analysis; MW interview: Scottford Simunyu of Zimbabwe & former US political prisoner; Tom Hayden: how to get the US out of Iraq.
Pt B - Dennis Kucinich announces his Presidential candidacy; Between the Lines; music.

BACK to the SPR Audio / Video page.