Below is an outline of a typical Making Waves show before our transition from a 2 hour show to 1. The current format is generally a condensed version of this, using the best content we can find from the sources below. One major change is that we are increasingly using segments from Talk Nation Radio rather than Between the Lines. 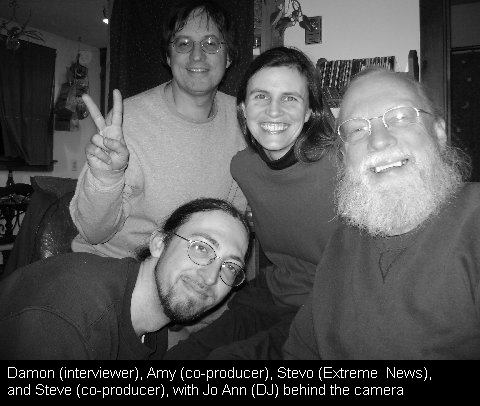 Theme music - by local women's drum group Tabbalat
Map outlining features coming up in this show
News you need to know - Generally compiled by Steve Diamond from the IndyMedia network (US), AntiWar.com, RawStory.com, various mainstream newswires (including the AP, Reuters, Inter Press Service, AFP [French], and DPA [German] ), and other particularly good news outlets like the Washington Post, the Huffington Post, the LA Times, the Christian Science Monitor, Democracy Now, Al Jazeera [Qatar], HaAretz [Israel], the British Guardian, the British Independent, and the BBC.
Progressive music
Local feature - An edited half-hour segment from a progressive speaking event, an interview of people working for change, or a special report from an activist event
Extreme News - News too true to be true: comedic "fake" news that gets at an underlying truth
Contact info with background music (Evening Stars by Alice Gomez)
PART B - (second hour)

Outside the Box - From Maine activist Larry Dansinger and WERU in Blue Hill Maine: 5 minute commentaries encouraging us to think 'outside the box.' For more information on Larry's work go to the Resources for Organizing and Social Change webpage.

Bucky Buckaw (r4a) - The Backyard Chicken Broadcast from Radio Boise, Idaho. Or see http://buckybuckaw.org/
Progressive music
Between the Lines - An award-winning half hour public affairs show from WPKN Radio in Bridgeport, Connecticut
Ending - A standard wrap-up of the show ending with a thought-provoking or inspiring quote consistant with the show's theme, with Avalon by Amethystium as background music

We occasionally use content from other sources, some of which are mentioned HERE.

BACK to the main Making Waves page.